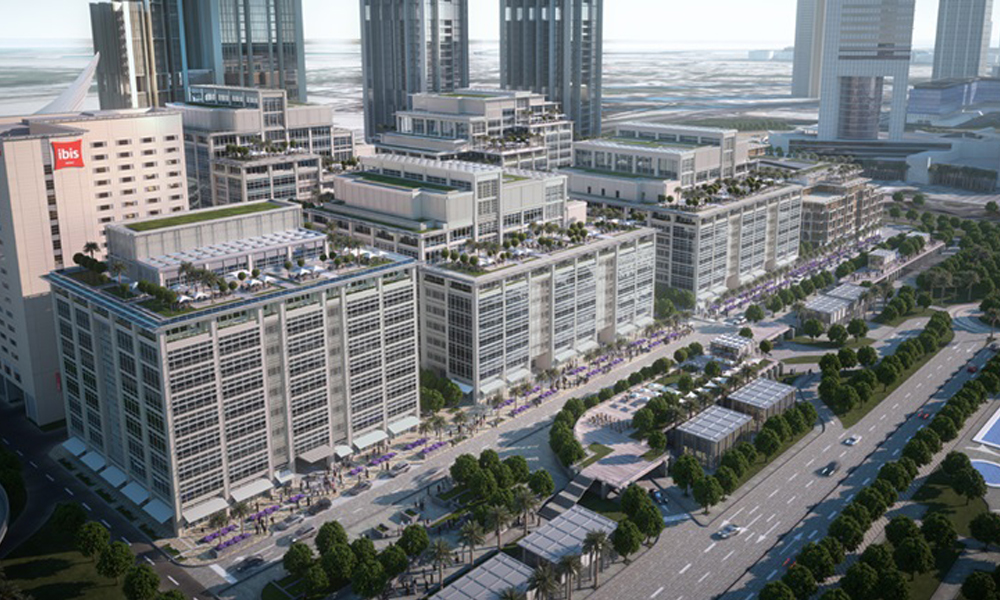 Established in 1989 and employing over 16,000 staff and labor, ASGC is a vertically integrated construction group that is best known for delivering turnkey special projects in the UAE, Egypt and other countries. The company owns the majority of its supply chain and utilizes mostly in-house resources.

During its 3 decades of successful experience, ASGC has completed projects across diverse sectors such as residential, commercial, leisure, hospitality, healthcare, education, social infrastructure and industrial.

ASGC was appointed to construct Dubai One Central Hotel situated in Dubai’s central Business district. The hotel is in close proximity to the Dubai International Convention and Exhibition Centre.

The project’s scope of work consists of a 10-storey hotel building, with a buildup area of 418,000 Sq. Ft. (38,800 square meter). The Hotel features 434 rooms and suites, four restaurants, a cafe, a concept store, a pool bar, various dining areas, an arena, parking facilities, meeting rooms, and a rooftop lounge area.

The Hotel will be operated by the 25hours Hotels. The property is the first one outside Europe, and will become the largest 25hours Hotel worldwide, when it opens by 2020.

Overcoming workforce and productivity challenges were the main goals that ASGC was determined to obtain.

The company primarily wanted to concentrate on their workforce and project productivity. They needed to find an objective solution that could help them track their labor productivity. A data-based solution, rather than a people-based one, could help them engage with different aspects of the project and keep track of its progress more accurately.

Historically, project completion percentage was not tracked in real-time, therefore if there were discrepancies between the actual status of the project and the planned, it was unlikely that managers would find out about them soon enough to take corrective actions. Time and attendance tracking and identifying who is working on what task were problematic issues as well. They needed to know when workers arrive at the site, when they leave, and while on-site, what task they work on. Also, during each work shift, too much time was being lost for attendance control. Moreover, excessive idle labor hours and other workforce challenges caused significant financial losses and schedule delays.

ASGC Construction implemented Dominate OPM to automate the tracking of its workforce and optimize its project productivity.

To optimize time and attendance management, it was decided to use Active RFID. Location Routers were installed at strategic locations throughout the site. This included each location chock points, rest areas, restrooms, site’s store and all the productive and unproductive location zones. An Active RFID Tag (Helmet Tag) was affixed to each helmet, for both direct and subcontractors’ workforce. This way, each worker’s arrival, departure and movements throughout the site were captured and registered by the system. The immediate result was quick workforce entry and exit, no matter how many people entered or left the site simultaneously. This means a time saving of over 30 minutes for each worker per shift.

Likewise, the information related to workers’ idle times was available to managers in real-time. Location Routers automatically captured workforce data and sent it to the cloud. The time spent by each worker at different location zones could be compared against planned activity objectives. Managers would easily and accurately get informed of any worker’s time spent in unproductive areas. They would also know where to deal with labor inefficiencies.

The system also made it clear which team members are assigned to tasks, and which ones are idle and available to be allocated to other tasks. This eliminated the need to hire additional workforce and greatly reduced idle hours on the site, helping managers to allocate and reallocate their resources in a way that was most beneficial to their project.

Projects were imported from Primavera P6. Each project was comprised of different work packages, and each work package included different activities (tasks). Workers were allocated to each task, and all task details were registered in the system. Work completion percentage was entered to the system on a daily basis, making it possible to get a full view of the Project/Work Package/Task status in real-time. The information then could be compared against benchmarks to see where deviations from the planned timeline occurred, and how productive each activity had been. This way, project completion could be tracked in real-time.

Leveraging the real-time visibility and immediate insight that the system provided, managers were able to identify inefficiencies and opportunities, allowing them to discover the current & potential risks, make better use of resources and generate more impactful results. Implementing Dominate OPM enabled the company to achieve 28% in labor productivity. Videos of this installation can be viewed at Dominate SmartSite.

Dominate OPM provided the ASGC with real-time information related to the workforce, productivity and related issues. By implementing the system, the company achieved 28% in productivity improvements. Management were able to see where discrepancies are between a project’s actual status and what was initially planned; helping them to identify problems and make informed decisions before they could become a major risk.

“I think, for us as a strategy, productivity is one of cornerstones we really believe in optimizing, because we have a workforce of around 8,000 to 15,000, depending on if we include subcontractors or not, and this is kind of the base of our work. If we were able to optimize their work by one or two percent, that has a huge impact on us. So, that’s one of the things that led us to consider an optimization strategy or consider a software that could lead us to some kind of optimization relating to labor and assets as well, because asset utilization is also something that is taken for granted. When an asset is being shipped into one of our sites, the fact that it’s utilized or not, is not something that we really used to track. So we wanted to make sure that the solution that we are going to implement analyses all of the different data points and gives us conclusions on the utilization of both assets and the labor as well.”