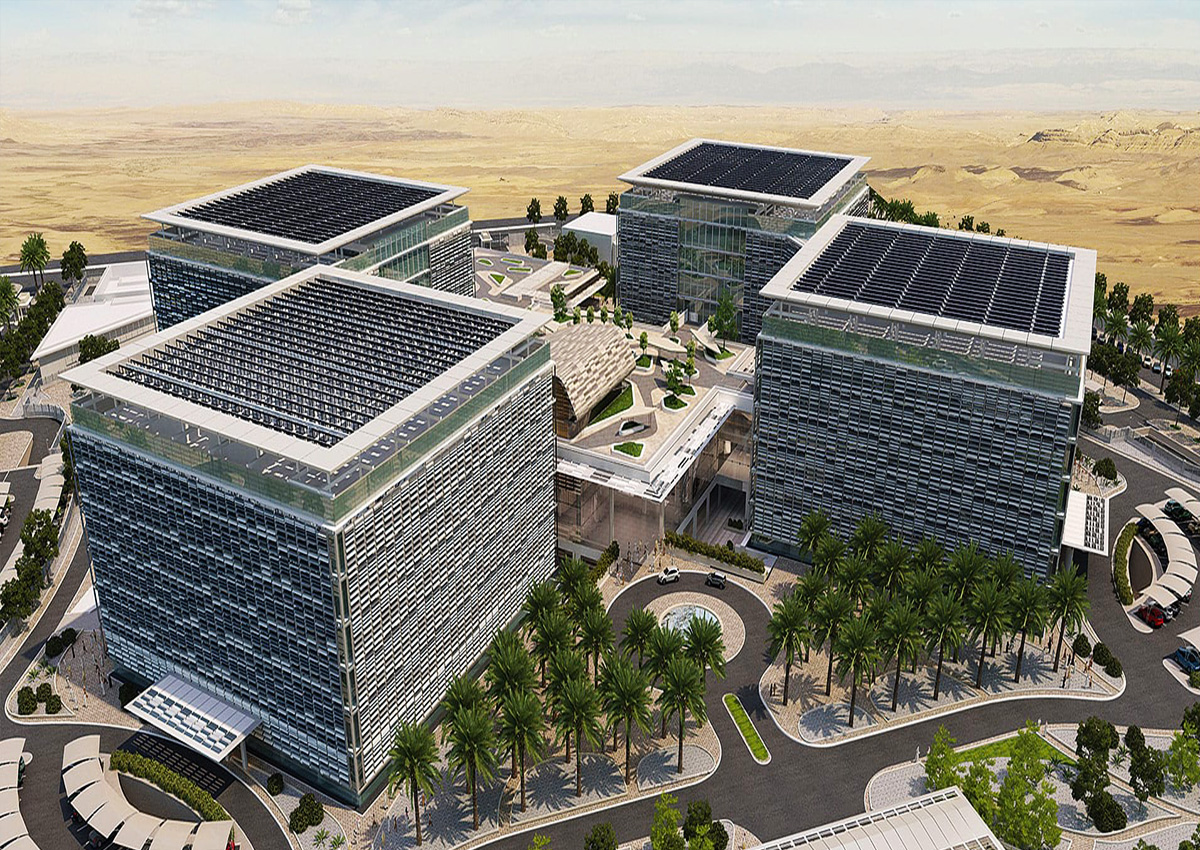 With over 150 years of experience, Shapoorji Pallonji operates in more than 60 countries, delivering complex and challenging projects. The company is headquartered in Mumbai, India and operates in 6 major business areas with 13 group companies, 3 divisions and a strong employee base of over 60,000 people from across 40+ nationalities. In its many years of successful and sustainable business, Shapoorji Pallonji has operated in different sectors such as Engineering & Construction, Infrastructure, Energy, Real Estate, Water and Financial Services.

Shapoorji Pallonji was appointed as the main contractor to construct the Saudi Electricity Company Headquarters in Riyadh, Saudi Arabia.

The project comprises a single city block size campus of four main office buildings, unified by a central podium structure. This podium is the functional and spatial heart of this development, connecting employees from within the four office buildings with each other, and providing access to shared amenities and landscaped recreation roof space. The built area of the project is 3.5 Million Sq. Ft. and it is expected to complete by November 2020.

On time and on-budget delivery of 3.5 million sq. ft. of world-class office complex is never easy, especially when dealing with 3,000 workers (direct labor and subcontractors’) working on different shifts and in multiple work zones. There were several challenges facing the mangers while working on Saudi Electricity Company Headquarters project. First of all, poor workforce visibility and control was a major issue. Second, too much time was being wasted for attendance control during the site’s arrival and exit. Third, excessive idle labor hours and other workforce challenges caused significant financial losses and schedule delays. And above all, poor production control was resulting in project delays. Managers needed to know, in real-time, where there are discrepancies between a project’s current status and initial estimates. Without a clear picture of what was happening on site, it seemed impossible for them to put an end to all the frustrating problems and costly delays.

Since the implementation of Dominate OPM was highly successful in Dubai Hills Business Park project, Shapoorji Pallonji decided to implement the solution in SA Electricity Company Headquarters project as well.

To optimize time and attendance management, Passive RFID was used for tracking the workforce. Passive RFID scanning tunnels were installed at strategic locations throughout the site. This included site’s entrance/exit points, rest areas, restrooms, site’s store and all the productive and unproductive location zones. For both direct and subcontractors’ workforce, a passive RFID Tag was affixed to each helmet, and the name and the photo of the worker were affixed to the front of their helmet.

As the workers passed through the RFID scanning tunnels, their personal information along with details such as date and time of arrival were registered into the system.

The positive result could be immediately observed. Workforce entry and exit to/from the site was greatly improved and speeded up, even at times when great numbers of people entered or left the site simultaneously. This way, a time saving of over 30 minutes for each worker per each shift was obtained. Prior to the installation of the system, workforce time and attendance information was available only with hours of delay, but after the implementation of Dominate OPM, the information was available in real-time, without delay.

To eliminate idle times, the site was divided into productive and unproductive areas. This allowed the managers to compare the time each worker spent in different location zones against the planned activity objectives. They would easily and accurately get informed of any worker’s time spent in unproductive areas, and know where to deal with labor inefficiencies.

Project Productivity Solution Was Utilized to Monitor Project’s Progress and Identify Deviations from the Project Timeline.

To track work progress and promote productivity, projects were imported from Primavera P6. Each project was comprised of different work packages, and each work package included different activities (tasks). In Dominate OPM system, workers were assigned to different tasks, and all task details were registered in the system. Work completion percentage was entered in the system on a daily basis, making it possible to get the actual view of the Project/Work Package/Task status in real-time. The information was then compared against benchmarks to see where deviations from the planned timeline have occurred, and how productive the project has been.

By implementing Dominate OPM, complete visibility and immediate insight into the status of the project was obtained, and remarkable results followed: reduced inefficiencies, errors, and labor costs. Managers could easily identify opportunities to make better use of resources, discover the current and potential risks and generate more impactful results. Implementing Dominate OPM enabled the company to achieve 26% increase in project productivity.

Dominate Operation Performance Management helped Shapoorji Pallonji managers to track the workforce and project’s progress & productivity in real-time. Once the system was implemented, they could see where project objectives are met successfully, and where there is no progress to be seen and reported. Dominate OPM empowered them to identify deviations from benchmarks on time and take preventive or corrective actions as and when needed. This resulted in 26% in project productivity, helping the project to be completed on time and on-budget.